A Compilation of Right and Wrong

This week started out fairly well. I spent a great deal of time in the greenhouse, starting seeds, transplanting and potting up seedlings, and hardening off some cabbages that need to get into the ground.

Went to a farmers' market vendor meeting and found out that not all markets are created equal. Not that there was any negativity, it's just that it was...different than I'm used to. But maybe that is because I'm biased. Or, because I have baggage. Either way. It was different.

The weather was perfect. In the greenhouse I couldn't keep my sweatshirt on - because it would have made me......sweat. I think I made up for any lack of Vitamin D I might have experienced all winter-long in just three days flat.

In between those perfect days spent in the sunny greenhouse were errands, school, appointments, and the like. And, old water-stoves that spring leaks.

In my errand-running and school-attending days I stopped in one of my favorite non-fast-food establishments to get a veggie sandwich. As I waited for my slow-but-worth-it sandwich, I saw this: 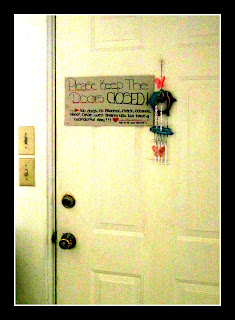 Which made me get closer, so I could really absorb what I was reading.... 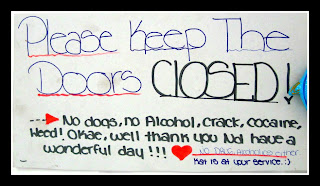 I had no idea that dogs, alcohol, crack, cocaine, and weed all fit similar categories. The only disparity I see, at this point, is the lack of a leash. 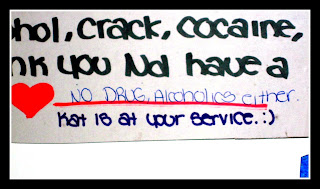 So I think that alcoholics probably aren't allowed even if they have a leash. At least Kat is friendly about it! I mean, there ARE hearts and all..... Besides, the sandwich was so good, I'd brave that sign again.

So, in honor of this semi-non-farmy post, I must end with saying that the one other thing that happened this week was that while I was out and about: I caved and brought home 22 somethings. I'll give you three guesses as to what they are.

A Daughter of the King said...

Such a delightful post. Love the sign! Congrats on the chicks. I do love me some chicken(s).
:)

I knew it, chicks... so fun! I am picking up a few more next weekend myself. Happy Easter Sheila