How To Ruin A Rural Farmers' Market in Five Easy Steps


1. Disagree with your Vice President, Market Manager and Board Members on everything. Accuse them of ganging up on you. Complain that local printers, local artists and local newspaper advertising is too expensive and avoid making any decisions (for years). Postpone everything until 'the next meeting.' Important: be very clear that your local products are "worth it," and that if more local folks would buy it, you wouldn't have such a hard time making ends meet. And you certainly wouldn't have to get a winter-time job.

2. Assume that "someone else" will take care of the responsibilities of the market; legally, logistically, physically and so on. Act surprised that things aren't going well. Implement rules and regulations that everyone must follow, but make exceptions on your own without notifying everyone else involved. Don't forget to make statements like, "well, we don't really have it in the budget...." when there is over $10,000 in the bank.....makes complete sense, yes?

3. Talk behind everyone's back. Ask personal questions of others in the group, that are none of your business, about the status of their mortgage (or lack-thereof), and whether or not they need to make money because they do or do not have a car payment, as well as make assumptions about every other part of their lives. Gossip as much as possible, it's what makes your world go 'round, after all. And most certainly, gossip with very close friends of the folks you hate the most - it makes everyone extremely comfortable and maintains the "team" spirit.

4. Treat the market manager like $h!t. Pretend that individual does not know what they are doing and take them for granted (for years). Pile as much work on them as possible and make them feel bad when you don't make enough money that week. Never offer to help put up signs, make phone calls, organize entertainment or hand out flyers. Do not respond to weekly emails so said manager can put a newsletter out showcasing what the market will have available. And certainly do NOT answer an email that requests a meeting LONG before the market season begins. Make executive decisions that you feel will benefit you personally, without exploring and researching all of the effects of your decision making process and at the VERY LEAST, make it a LAST MINUTE decision that causes havoc and wreaks chaos among all members of the farmers' market FOR OPENING DAY. And, by all means, call the market manager at home and scream into their ear that they made you look like a fool in front of your "professional colleague" because the manager made a decision to over-ride YOUR executive decision in order not to put the general public, vendors, or anyone else in physical danger. Be sure to hang up rudely after you bitch at their spouse, too.

5. Lastly, after the market manager resigns from their (volunteer, unpaid) position, go on as if nothing every happened, and NEVER, ever apologize for any mistakes you might have made. Ever. In fact, blame all of the problems you have on everyone else. Then, be sure to wonder how it all got done as the market is in the final stages of ruin. Look around for someone to blame.

Come on, "start a farmers' market, it'll be fun" they said.

Why I Don't Blog More Often

All sorts of funny thoughts, ideas and quips run through my mind at any given moment throughout the day. Sometimes I remember them, and sometimes they slip down memory lane without so much as a footprint. When I do manage to capture moments with a photograph I immediately have the best of intentions to share them with you, dearest, loyal readers reader.

And then: I get too busy. Or, sometimes, that can be read: lazy. After all, Captain Strong Arms DOES call me the Fair Weather Farmer. And I wholeheartedly agree.

The quotes, colloquialisms, the quips, the funnies, the not-so-funny-thoughts and sometimes downright sad, dreary realities don't get written down. They just float.

At least the photographs are recorded. Even if they just float, they still exist, they are tangible. As tangible as a file on a USB storage device can be, that is.

Although this blog was intended to be a farm blog - what it really is, is a realistic representative of life when it comes to being a wife, mother, homeschooler, market-garden grower in the midst of any season - it's going to just float, too.

One of my favorite quotes is, "Life is what happens while you are busy making other plans." ~John Lennon

Hattie the cow is doing well. She is producing over a gallon and a half of milk, which is really nice (see biscuits I made this morning). Last Friday she got her hooves trimmed. It took two individuals pulling on a carefully and strategically placed rope threaded over and about her body to "lay her down," but it was over in about 10 minutes. No stress, no sedation (which can be really dangerous for cows - did you know that?) and her pedicure is complete. We love our vet. Dr. Amy comes highly recommended by us.

Maybelle the goat is........a goat. She's a solitary goat, by the way, which I found out the hard way early this spring when I brought home a sweetie of a Pygmy goat named Butterfly, which Maybelle promptly and repeatedly butted until she hid under the milking stand. For a week straight. Butterfly has a new home now, and she just gave birth to a kid not long ago. She doesn't have any bullies butting her now. Maybelle is happy as a single goat still giving a quart of milk a day in her 16th month of lactation. I do think this fall we'll try to find her a husband. For a day. For the remaining 364 days she will harass Hattie and look at me as her BFF.

Spencer and Deets, the resident equine lawn mowers are currently making the rounds out and about around the house. The grass finally began to grow after we received an inch or so of rain last week after almost 30 days of utter. and. complete. dryness. Phew! While they always have hay available, they like the salad bar that is the unmowed grass right now. It's pretty cool to sit here at the computer (in the air-conditioning) and look out the window as they walk by.

Duck news: We adopted a lovely young lady named Topper a few weeks ago - she's a Pekin duck, and has now integrated herself into the small flock of three other Pekin ducks. What's special about Topper is that her mom, Suzie, found her at a large chain farm and garden store. Topper had wry neck and Suzie saved her, raised her in the house and eventually Topper lived mostly outside and somewhat with Suzie's chickens. But Topper was lonely for duck-company. So, she came to live here. What happened next surprised even me. Topper and Hattie became BFF. Topper circles Hattie's legs and catches the flies that land on her legs, belly and Hattie even lowers her head for Topper to get the flies from Hattie's face. Amazing. Just....amazing.


Here's a link to the video of Hattie and Topper together. Enjoy!

Chicken news: they are still laying eggs, thank goodness, even through this heat-wave/drought/humidity attack that is the North Carolina summer that we all know and love. I love chickens - that is all. 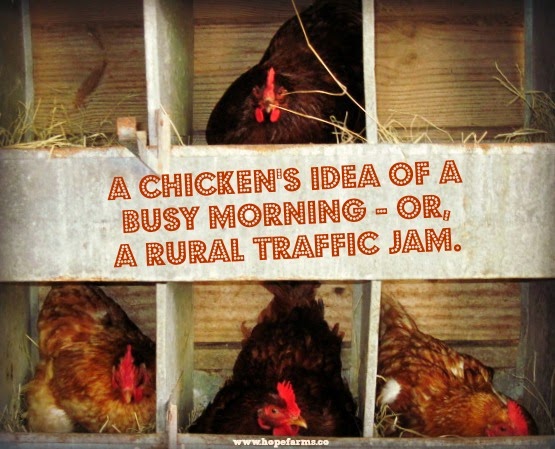 Dog news: Since I wrote last, CJ - our Aussie/Heeler boy that was born here on Thanksgiving of 2007 - has gone on to Rainbow Bridge. After his diagnosis of diabetes in January, we were never able to get his blood-sugar regulated. We injected him twice daily with insulin, adjusted his diet, tried blood-sugar stabilizing herbal supplements, as well as hydrating him with subcutaneous fluid treatments. He continued to decline. And then one day, in not so many words, he told us that he was finished with his time here. So we obliged. But we miss him every single day.

As an aside, we rescued a dog in June from Stanly County Animal Control with the help of Friends of Stanly County Animals - this "little dog" is very sweet and gets along very well here with everyone, cats included. Sam couldn't care less either way about another dog. She's still her own person. Er, ahem, dog. 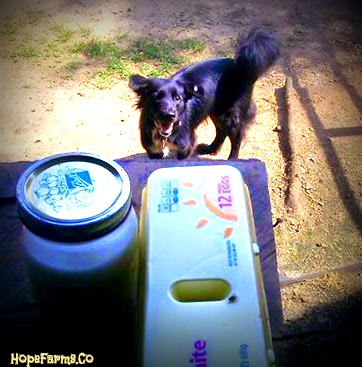 That's all I feel like writing about for now, we'll see if I can manage another post before August comes and goes.

Meanwhile, if you come to see us: Ring bell, if no answer pull weeds.