I'm up late, or early, rather, as it is technically Saturday morning at 3 am. I've surveyed all the problems in the world and have determined that life is a lot like farming. "Farming is a profession of hope," said Brian Brett. There are so many things that resound with me regarding that statement.

Today was one of those days. It was great, it was tragic, and strangely simultaneously normal.

I'll break it down:

Eddie and I went on a field trip for homeschool - the Discovery Kids is a terrific way to show children how the imagination can trump a pile of worksheets any day. After several days of Language Arts, Math, Spelling and Science - we put the "hands on" into our learning day. We both had a great time. What we didn't do was take pictures. I opted for joining him in the fun, and so I did not traipse around with my camera. He especially liked the water "exhibit" where he pretty much got drenched, played with boats, and unknowingly learned about density, gravity, displacement, and pressure.

Sadly, whilst we were having fun, another baby chick in our brooder died. That's two in two days, too high of a mortality rate for this soft-hearted farmer. We buried the baby and talked about why, sometimes, life with animals is really difficult and sad. Farming is hard. 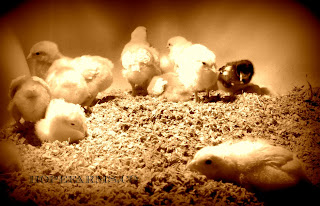 Later, upon watering seedlings, transplanting some Swiss Chard and Kale seedlings, I looked upon two of my cabbage patches to find that Hattie had helped herself to my early cabbages. So much for taking those to market. She had let herself out of the open gate that Captain Strong Arms had left ajar while he was picking up the manure to add to the compost pile. At first, I was seething, "damn cow!" I said. But when I realized she could have done so much more damage, I stopped and felt gratefulness creep in like a kind reprimand.

Sigh. Farming is frustrating. And scary. What if some of my crops fail? What if I have to resort to using chemicals to prevent a total loss of a certain variety to pests? What if Hattie gets out again? What if I'm not good at this?

Sometimes I wonder why we do it. The grocery store is just 8 miles away. The jobs are just over an hour's commute north, east, and west of us. Is it because it's in our hearts? A nagging sense of duty that cannot be shushed away? An unending call from day to day to grow, nurture, cultivate and share? Once in a while unwanted doubt creeps in and takes a seat, "you can't grow enough to support your family and a farmers' market. Who do you think you are? You don't know what you're doing."

Farming is sometimes full of self-doubt.

It certainly isn't for the recognition - the fame, or the money - the fortune. Farming is developed. I was going to say it is in your blood, and while I do believe that to be true, I'd say that something can be in your blood without being embraced. It has to be developed. Cultivated.

What are you cultivating?

I'm signing off. Breakfast is just a few hours away. See you on Facebook for a morning mid-day photo.

I totally hear ya. I've had a lot of self-doubt these past few weeks too. I just have to believe that we're right where we are supposed to be right now.

So, so sorry about your chicks. That would be so hard. You all are doing a wonderful job!

Aw Sheila, you have such a way with your words. I love and connect very much to this post. I'm sorry about your chicks, that sucks. Although doubt is a creeper it sure seems that your outlook is bright :)

Sheila, I know you, not super duper personally, but I know you have a caring heart and a kind aura. That is why it hurts. Before the advent of Internet and blogging, you would have probably kept this to yourself. But then we would not have known there are fellow people who are having days just like us. We love you for putting it out there. That you never stop trying. Be strong, be blessed and thank you got your blogs...